Empire today updated the market with images of the flare at Carpentaria 1. This is a particularly exciting time for Empire as years of work starts to show itself in gas to surface. Tom (inGauge Completion Engineer) is getting to be an expert with the inGauge drone, taking some fantastic images of the flare shining forth on site, as the sun sets over the vast expanse of the Empire acreage. Tom was quoted as saying that using the drone was the only way of keeping Kelvin out of the photos.
Having completed the initial CTU unload, we are now preparing to run the production test completion in the well. Daniel, our frac engineer came back happy but exhausted after his stint on site, having encouraged every pound of the 1.4 million pounds of proppant pumped and then overseen the CTU operations.
Tom and Scott (inGaugue OCR), will oversee the next phase of the well on site as Empire tests the well to get data that will allow us to understand and develop the Beetaloo.
Latif, who has been project managing the project for inGauge couldn’t get to site himself as he is already planning the next operations.

inGauge is pleased to parter with Project Kindy, a small charity working with children in Africa.  inGauge provided funding for a well to be drilled to provide fresh water for a kindergarten and also to its associated village community.

END_OF_DOCUMENT_TOKEN_TO_BE_REPLACED

Successful two well campaign for Comet Ridge in new Mahalo North field. The Mahalo North 1 and 2 wells are another step towards Comet Ridge proving additional reserves and demonstrating the extension of the Mahalo field fairway.

END_OF_DOCUMENT_TOKEN_TO_BE_REPLACED 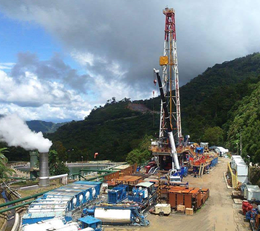 A geothermal energy provider based in the Philippines requested a review to identify gaps in current geothermal subsurface assessment, engineering planning and execution practices, systems and processes. inGauge completed the initial review against current Oil and Gas industry systems, practices and processes.